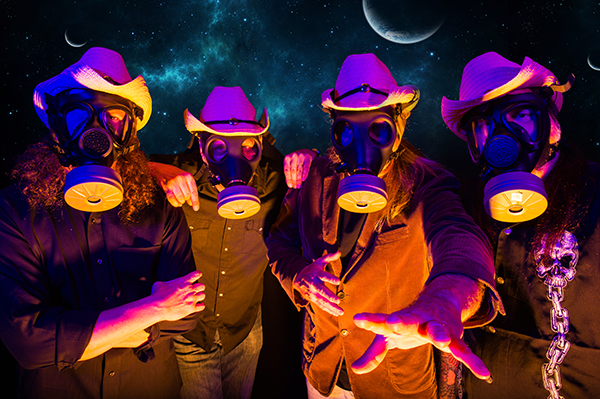 Galactic Cowboys return with the original line up and their first album in 17 years.

Music Theories Recordings/Mascot Label Group are thrilled to announce the signing of 90’s progressive metal adventurers Galactic Cowboys who return with the original line up and their first album in 17 years.

Dane Sonnier (Guitar), Ben C. Huggins (Vocals), Alan Doss (Drums/Keyboards) and Monty Colvin (Bass) are strapped in, heading back to the Ranch on Mars and are recording together for the first time since 1993’s ‘Space In Your Face’, to rain down a sonic meteor shower later this year.

The Houston, Texas quartet caught the attention of Geffen Records with their eclectic blend of melodic vocals, thrashing riffery and progressive explorations to release their self-titled debut in 1991, the same year as label mates Nirvana’s ‘Nevermind’. Though the antithesis of grunge, the Cowboys none the less chalked up videos in heavy MTV rotation, and a memorable appearance in 1994’s ‘Airheads’. Tours followed with Dream Theater, King’s X, Anthrax and Overkill. Going on to release an additional 5 albums, the group disbanded after 2000’s ‘Let It Go’. Their music left a lasting mark on many musicians, including fans Mike Portnoy, Kerry Livgren (Kansas) and Eric Singer (KISS).

“We said we’d only come back if the world needed us. When Mascot sent out the distress call we knew it was time to return. Get ready world. Here come Galactic Cowboys!” adds Ben C Huggins.

Talking about the addition to the label, CEO Ed Van Zijl went on to say, “Every music enthusiast has a favourite band that they dream would reunite one day. Fans worldwide will be stoked to see Galactic Cowboys back in their original line-up, and so are we. We’re excited to have them be part of our growing Mascot family!”