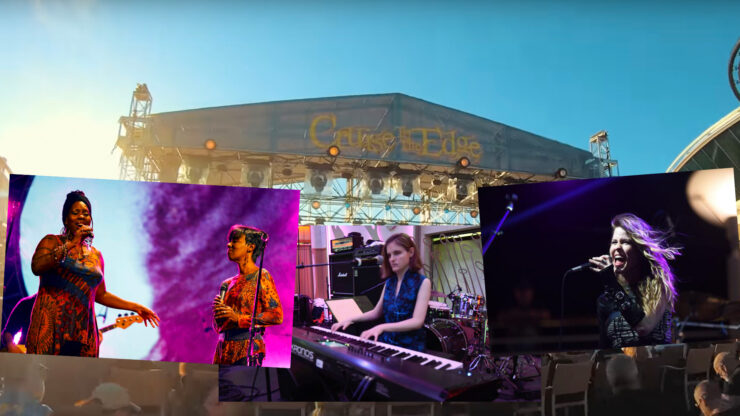 Cruise to the Edge 2022 sails May 2nd-May 7th out of Port Canaveral, FL

Rick Wakeman and Alan White had a long-running joke back in the 1970s about the predominantly male audiences that attended Yes concerts back in the salad days of progressive rock’s first wave. “Rick I used to have a standing joke where we’d say, ‘Hey, did you spot that woman out there in the crowd?”

White said in a recent interview, recalling the relative absence of women at those early Yes shows. “Back in the ’70s, it was all guys who looked like they were engineers from Microsoft, analyzing everything we played.” But a lot has changed in 50 years. And not just for Yes. “Now, I see a lot of women out there, yeah,” White noted.

It’s not only prog audiences that have changed in recent decades to include more women. More female artists are taking the stages of progressive shows and recording new music, diversifying of what was once primarily a men’s club. Of course, there have been a few notable exceptions to this trend, including Renaissance’s Annie Haslam, Curved Air’s Sonja Kristina, and Anneke Van Giersbergen, who have been flying the prog rock flag for decades. But in recent years, the number of women in prog – on stage and in the audience – has continued to grow, mirroring the rise in other previously male-dominated industries from

Exhibit A: The last Cruise to the Edge progressive-rock music festival in 2019 offered ample evidence of the rise of women in prog.

Cruise organizers confirmed the tone-setting seagoing music festival featured a record number of female performers as well as cruisers on the ship’s manifest. Nearly half of the 30-plus acts at CTTE featured female musicians, singers and composers. A number of those acts were fronted by women in starring roles aboard the five-day Caribbean music cruise. That may be one reason so many female fans were on board for the musical performances and not as tag-along spouses or girlfriends of the prog-loving men in their lives. It was a far cry from the prog audiences since the 1960s and 1970s, when men outnumbered women virtually 10-to-none.

The upcoming Cruise to the Edge, to set sail next month, will also feature a number of female artists making a return visit to cruise stages, as well as some new faces to the cruise scene such as singer/guitarist Jane Getter who brings her blend of rock/jazz/blues/prog to the floating festival with her own Jane Getter Premonition.

One of those returning CTTE artists, District 97 vocalist and front-woman Leslie Hunt, suggested progressive rock is just catching up to what’s happening in other formerly mostly-male fields — from business to politics to science and medicine.

“I think that the general wave of women right now is that we’re just finding ourselves in more quote-unquote masculine arenas and if we are the face of the thing, the thing is going to draw more like-minded individuals,” she said. “On this cruise, most of the people who approach me and connect with me are women. Not the men, as much. And there are so many women on this ship, it’s great.”

She added that there is a rebellious aspect to her performances that echoes the outside-the-mainstream nature of the very first progressive-rock artists. “As a performer I almost rebel against the things women aren’t supposed to be doing, like overt sensuality,” says Hunt, who manages to be both sultry and aggressive on stage. “I’m like, yeah, just try to box me in. But it’s on my terms. I think women bring a certain sensual, natural creative fluid interpretation to something that maybe originated in the more intellectual.”

Lorelei McBroom, longtime vocalist with Pink Floyd and the Dave Kerzner Band (along with her sister Durga), likened the trend to what happened with black musicians in the 1950s and 1960s. “Little Richard and other black performers that weren’t initially accepted…they were only allowed on black radio,” she noted. “Fast forward to now, and the record company people still assume that black people don’t like rock and roll or that women don’t like progressive rock…and it’s just not true.”

Her sister, Durga McBroom, agreed. “I started in acting, and all her roles were prison inmates and hookers,” she said. “Then I got into music and they presumed I wasn’t into folk or rock.” Both said they have seen the change firsthand, in the fans who come to see their concerts. “Until recently guys used to come to our shows and bring their girlfriends, but now women are coming on their own, without a guy,” Lorelei noted. “It’s just a change in the culture, women are coming into their own in music, and other fields, too.” The two sisters will also be performing on this year’s cruise as the McBroom Sisters.

Julie Slick, bassist with the Adrian Belew Power Trio, sees the trend as part and parcel of progressive music becoming increasingly diverse and welcoming to new ideas and approaches. “I just think it’s become a more inclusive community that is more open to women,” she said. “And because prog has been around for so many years, it’s just a natural evolution. It should be this way — it’s progressive and that’s why it’s called progressive rock, right?” For younger generations like hers, there’s no sense of prog as a “guy’s thing,” she added. “I wasn’t alive in the seventies, but perhaps there was a level of pretension that is dissipating a little,” she said. “I grew up adoring King Crimson and Yes, I mean Chris Squire is my biggest influence. And I didn’t even think of the sexism of it, it’s just music. To me, music is a universal language, as cheeky and cliché as that is, it’s true. And so there shouldn’t be this classification really.”

Frenci Vervest, a prog fan and veteran CTTE cruiser from the Netherlands, agreed that as prog has expanded since the 1970s to incorporate more types of music – from folk to jazz to soul and even R&B – the genre has drawn in women and people of color than was once the case. “There are so many different styles in progressive rock out there today, there’s something for everybody, women included,” she said, “especially with the younger bands.”

For veteran CTTE cruisers Melissa Martin and Shane McGeehin, progressive rock has been the soundtrack of their courtship. The Atlanta couple even decided the 2019 Cruise to the Edge was the perfect setting to get engaged. The two phoned family and friends from Key West with the news, posting a photo on Facebook of Melissa — her right hand pointing to the word “Yes” on her concert T-shirt, her left adorned with her sparkly new diamond ring.
“Get it?” she joked. “I said YES!”

In addition to Hunt, Slick and the McBroom sisters, there were a number of incredible female performers on CTTE 2019 – those included:
• Rachel Flowers, the twenty-something California keyboard phenom who was the talk of the cruise, after wowing crowds with several extraordinary recitals.
• Tei Sena, virtuoso violinist with Japan fusion masters Electric Asturias, made a lasting first impression with her classical-prog-jazz lead lines.
• Pendragon’s backup singers, Zoe Devenish and Verity White, were more than mere eye candy behind front man Nick Barrett. The harmonies they pour over the music are integral to the band’s signature melodic prog.
• Nick D’Virgilio side project UniKue — a prog-rock cover band like none you’ve ever heard – featured five ukulele players and his talented daughter Sophia D’Virgilio sharing vocal duties with the talented Carolyn Martin.
• Ex-King Crimson violinist David Cross played two spell-binding sets showcasing his recent album, “Crossing the Tracks,” which feature singers Sonja Kraushofer, Anne-Marie Hurst and Ofra Haza. At CTTE, vocal duties were handled deftly by Jinian Wilde, who seemed equally at home with Cross’s new, Eastern-influenced material and old Crim classics like “Exiles” and “21st Century Schizoid Man.”

Without question, many of the most memorable performances of CTTE 2019 featured women artists and certainly the case will be the same on CTTE 2022, and in Prog music in years to come.