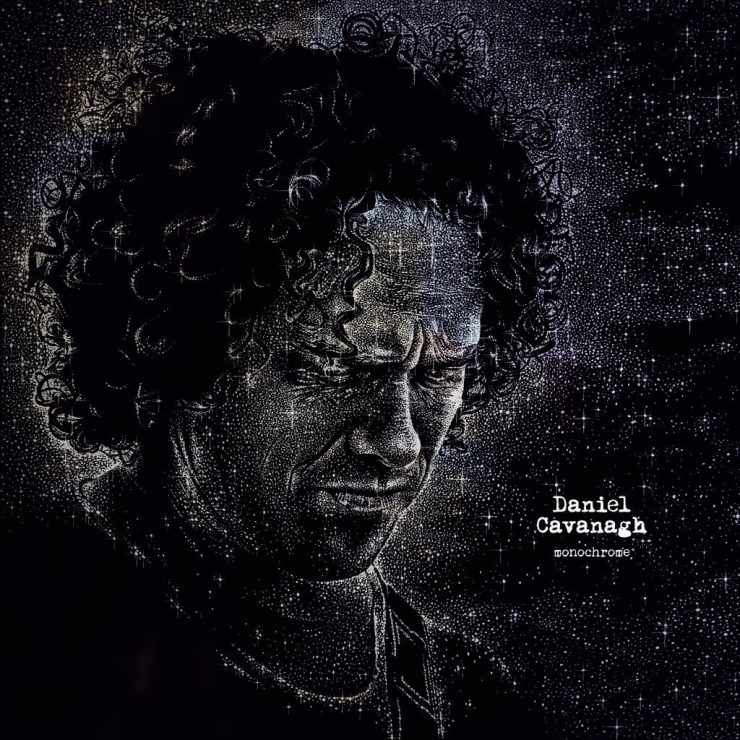 As the man behind many of English troupe Anathema’s greatest compositions, Daniel Cavanagh has continuously proven to be one of the best songwriters in modern progressive music. In fact, the band’s last few releases—and especially 2012’s Weather Systems—portray sentiments of loss, love, longing, and the like with a level of depth and beauty that’s virtually unmatched by any of their peers. It’s no surprise, then, that Cavanagh’s latest solo outing, Monochrome, touches upon parallel topics with a similar sort of enveloping emotion, refinement, and gracefulness. Unfolding more like a cumulative journey than a collection of individualized statements, it could be more eventful and/or varied in spots, but the majority of it is as moving and memorable as any of his prior outings (and even its most tiresome bits still pack a poignant punch).

As for the material itself, he says that “a lot of [it] . . . could easily have made it on to the last Anathema album or any future album . . . there are several highlights . . . [that] are among some of my best works of the last decade. Taking them from the band was not an easy decision but I am glad; they’re so personal as to not need more input.” Indeed, Monochrome actually seems more like a proper follow-up to Anathema’s 2014 release, Distant Satellites, than this year’s The Optimist did in several ways; plus, it further cements its creator as a master at using dynamic instrumentation, heartrending lyricism, and nuanced singing to captivate and embody his audience.

The sequence starts with its most overtly charismatic track, “The Exorcist” (no relation to the horror classic, in case you were wondering). Like much of Anathema’s work, it begins quietly, with an ethereal atmosphere surrounding a gentle piano and acoustic guitar motif as Cavanagh sings with his trademark endearing defeat. It’s a recognizable template for any longtime follower—it even recalls “Crestfallen” (from Falling Deeper) and “Are You There?” (from A Natural Disaster) at times—yet its tragic splendor is overwhelming nonetheless. Likewise, fans are accustomed to reflections like these (“And I can’t be where you are / And I can’t feel what you feel today”), but as always, his performance makes them hit as hard as ever. This is particularly true during the chorus, when percussion is added as his outcries of “Do you trust in who I am?” and “Cause you saved me from myself!” to reveal a life-affirming thesis delivered via some of the best singing he’s ever done. Of course, the intensity dies down as it concludes, making it truly appear like a lost treasure from We’re Here Because We’re Here or Weather Systems.

Many of the subsequent songs are slightly more untraditional and/or repetitive in structure. For instance, “This Music” more or less features Cavanagh and Van Giersbergen repeating the same few phrases over a simple, luscious backing. While it could have a bit more to it, there’s no denying how serene and gripping it is (as always, Van Giersbergen is downright angelic). Afterward, “Soho” finds them joined by Phoebe, who shines during the [mostly] instrumental ebb and flour of sorrow and passion, while “The Silent Flight of the Raven Winged Hours” is an immensely haunting, cinematic, and inventive centerpiece bursting with ghostly backing chants and screams, bleak instrumentation (including more cyclical guitar and piano patterns), and even some retro keyboard lines (that conjure Pink Floyd’s Wish You Were Here and Animals). Although the aforementioned opener is the most accessible track here, “The Silent Flight of the Raven Winged Hours” is easily the album’s ultimate triumph.

The brief “Dawn” is also among the most striving and surprising entries here, as its Celtic arpeggios, festive strings, and dreamy croons unite in a simultaneously inviting and ominous environment; it burrows into your soul from the start and never leaves. Next, the penultimate “Oceans of Time” is a more straightforward and familiar piano ballad that begins sparsely and then adds many evocative layers (such as delicate percussion and more lovely counterpoints from Van Giersbergen). (Devotees many notice a melodic nod to Alternative 4’s “Fragile Dreams,” too, which is exciting, if almost certainly unintentional as well.) As for closer “Some Dreams Come True,” it’s easily the biggest missed opportunity of the whole set, as it simply doesn’t offer enough to warrant its nearly nine-minute length. Don’t get me wrong—its core ranks alongside most of Cavanagh’s previous tranquil epilogues, with its two halves offering a sublime blend of strings and piano to conjure the hope and innocence of childhood, but it outstays its welcome a bit because of how uneventful it is overall.

Monochrome accomplishes a commonly difficult task for a solo effort: it’s fresh and unique enough to stand on its own while also upholding many of the attributes that make the artist’s home band so special. In other words, it earns its place in both Cavanagh’s isolated arsenal and Anathema’s catalog. Sure, it relies a bit too heavily on the same few techniques at times, and a fair share of it feels like previously treaded territory, but when said terrain is so heavenly and moving, well, that’s a bit forgivable since it’s still an essence that almost none of his peers can capture. Best of all, the most invigorating and unanticipated parts of Monochrome stand out even more in contrast, not to mention reveal how much Cavanagh can do when left entirely to his own devices. By and large, it’s a stunning work that deserves to be celebrated.