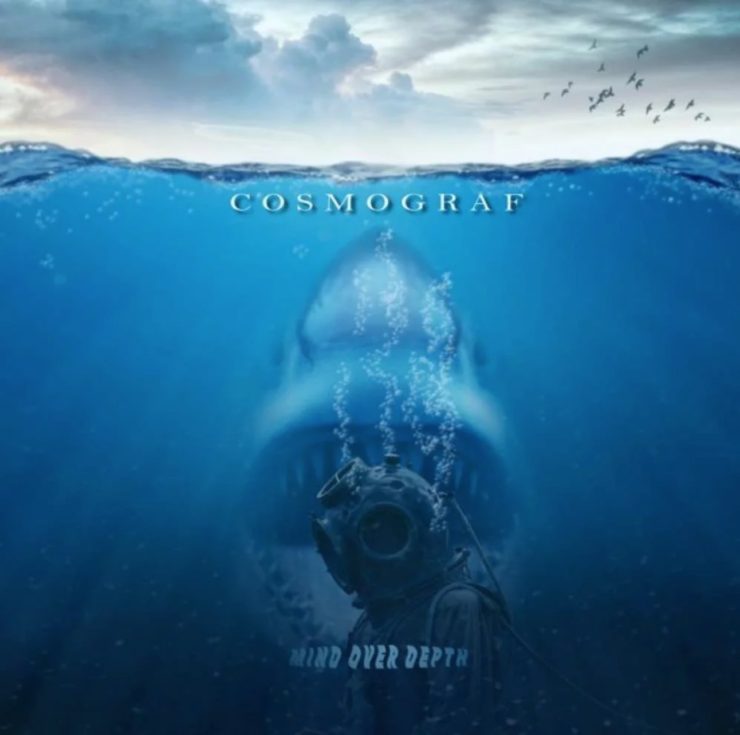 Review of the new Cosmograf album – Mind Over Depth released on April 12th, 2019.

“Unlike a lot of my previous work, this record is not really a full concept album in the sense of there being a narrative or story. It does however have a strong overall theme linking each song; Everything going on in our minds – every thought, feeling, sensation, everything we are aware of – is in fact happening only in our private internal worlds. Our reality is defined by the attention we give to these thoughts and the negative ones can inevitably lead to us feeling out of our depth. Mind Over Depth is characteristically introspective and allegorical like much of my work, but this record is much heavier than my previous albums with influences that draw from modern progressive metal, electronica and classic heavy metal.” So says Robin Armstrong, the creative genius behind Cosmograf, a musical project that has produced seven brilliantly crafted albums of cinematic style and substance with utterly involving storylines.

The driving force behind the music has always been Robin’s powerful and dynamic guitar playing and that comes even more to the fore on the five compelling and potent tracks on the album. Robin is joined on the album by Kyle Fenton on drums who played on 2017’s The Hay Man Dreams and special guest Colin Edwin (Porcupine Tree/ O.R.k), who played on the 2014 release, Capacitor.

Every Cosmograf release has been expansive in scope and precise in detail and that has made them some of the best leases of recent years. Allaying any fears, “Mind Over Depth” has taken that legacy and improved on it, there is a majestic and compelling overarching aura to the music which can be felt from the first track, “A Million Choices”, right through to the closer, “Goodbye To All Illusions.”

I know Robin is not one for genres and, generally, neither am I but this is definitely what I would coin Wide Screen Progressive Rock with its totally expansive soundscapes and immersive listening experience. The humongous guitar riffs that punctuate the record are some of the artist’s most prominent yet, just listen to the lengthy solos in “A Million Choices”, you can’t help but throw in a little air guitar when the moment takes you.

Robin speaks about the heavy metal influence and no more is that heard than in the monolithic, hewn from granite “Godspeed”. Don’t let the subtle intro fool you, this track is a monster and has the heaviest riffs you will have ever heard from Cosmograf, like the bastard love child of Black Sabbath and Steven Wilson.

“The Smoke And The Flame” is more wide-ranging in scope with a more subtle and sombre tone that is still backed by the edgy, aggressive guitar tone and “Sharks” just wants to kick the proverbial sh*t out of you with a dangerously addictive riff that could fell mountains. It’s a moody, cantankerous piece of music with a creepy undertone that gets right under your skin, deliciously dangerous in scope and feel.

All through the album Robin’s distinctive and impressive vocal adds to the almost oppressive and enigmatic aura that pervades through every track leading up to the final installment, “Goodbye To All Illusions”.  A song that is perhaps closest in feel to previous Cosmograf offerings. An apprehensive feeling comes over with the slow burning start which soon opens up into the most progressive oriented track on the album and one which closes the record out in consummate style, punctuated by thought provoking pieces of electronica.

“Mind Over Depth” is another impressive offering from the talented Mr Armstrong under the Cosmograf moniker and the lack of a narrative proves no detriment at all. Powerful, cinematic and enigmatic, all the plaudits this release is garnering are richly deserved and will hopefully attract a new audience to Robin’s music.

Mind Over Depth Track Listing:
1. A Million Choices
2. Godspeed
3. The Smoke And The Flame
4. Sharks
5. Goodbye To All Illusions