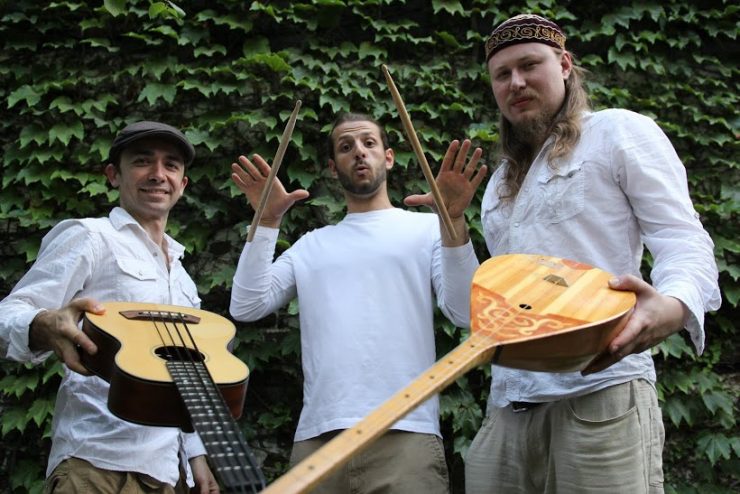 Instrumental trio Consider the Source, the planet’s preeminent Sci-Fi Middle Eastern Fusion ensemble, are releasing their first studio material in four years; A 3-disc collection titled World War Trio which will launch with the debut of a compositionally driven EP (part 1) on Halloween showcasing their songwriting prowess, with the dazzling displays of  furious virtuosity taking a backseat. Recorded at Bunker Studio in Brooklyn, funded by a successful Indiegogo campaign, this will be their first recording with drummer/percussionist Jeff Mann, whose recent addition has supercharged the band’s chemistry. World War Trio spans three discs and a universe of sonic territory. Their masterful improvisation, frantic energy, and unique blend of progressive rock and Middle Eastern music have brought them worldwide acclaim, and a rigorous global tour schedule has forged them into a fearsome live band.

Disc one, “Put Another Rock in that Bag” will contain an epic, 25-minute work in six parts. It features one section written by Jan Zehrfeld, mastermind of prog deities Panzerballet, with whom Consider the Source has toured throughout Germany and the US. Consider the Source will premiere the work on Halloween in Albany, NY with a full performance of the EP, launching a tour that will lead to the release of discs two and three as a double album in Fall of 2015. This double album will showcase the other sides of Consider the Source: authentic instruments from around the world, acoustic songs, ballads, and improvised pieces. Fans need not worry, however: the EP will feature a short “Making of World War Trio” documentary, with previews of tracks from the forthcoming album.

Check out the trailer: