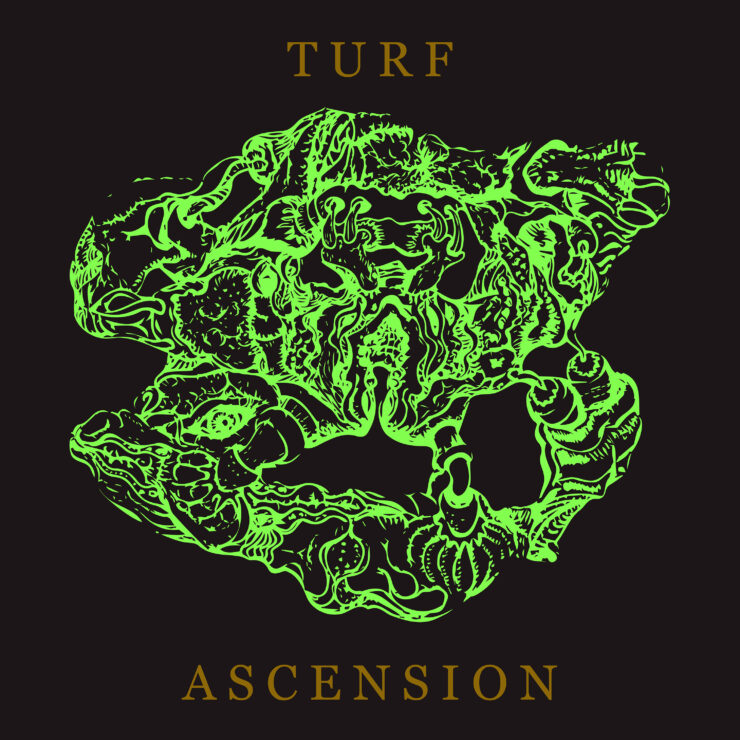 Review of the new album from Bubblemath – Turf Ascension

If one were to describe prog to the uninitiated, it would perhaps be best to liken it to pineapple pizza. It’s a bizarre concoction of meat, cheese, and fruit that only a select few people will enjoy, and even then, can be alienating for some depending on the balance of ingredients. When it comes to pineapples specifically, a good rule of thumb is to use less of them, so they won’t overpower the flavor. People still pepper pizzas with pineapple, unfortunately, and the results often indigestible. Bubblemath’s Turf Ascension comes close to being that kind of pizza. It’s cooked perfectly (the performances are flawless, the production is crisp but not too polished), but the pizza/album has an overbearing amount of pineapple that casual listeners are likely to find too much for them.

Let’s back up. Bubblemath are an accomplished prog-rock outfit from Minneapolis, MN who have been releasing music since 2001. Despite how long they’ve been in the business though, the band have only released 3 albums, making them a somewhat unpredictable force. Their two previous records put a great deal of emphasis on musicality and quirky songwriting, yet for Turf Ascension, the band decided to put more effort into their lyric writing and – to paraphrase the words of keyboardist Kai Esbenson – allowing themselves to develop themes. It’s a noble goal, but it’s also responsible for the overabundance of pineapple on the proverbial pizza.

The album opens with “Surface Tension,” a track which avoids the prog cliche of building for several minutes in favor of going straight to the verses. It’s a gutsy move, but it also hints at the one major issue with the track. The lyrics, while telling a gripping story that seems inspired by the school shootings which plague the United States, are just too dense. They take up so much of the composition’s runtime, and the repetition of the vocal melody can become overbearing as a result. Yet the track is undoubtedly well-composed given that the near 18-minute runtime flies by (even on first listen) and features several gorgeous transitions that evoke the music of Brian Wilson. The track is also saved by the stellar instrumental passages which strike the perfect balance between technical showmanship and simple melodicism.

“Everything” is the second track on the album and an immediate improvement over its predecessor. The band takes time to build toward the verses with an esoteric intro that feels inspired by Porcupine Tree, and melody is perhaps the strongest on the album. This euphonious quality even extends to the instrumental sections which range from stately fanfares to the serene synth line which closes the piece.

The album’s third track, “Decrypted,” continues in a similar vein as “Everything,” yet it features more of the band’s signature sound. The instrumental passages are quirkier, the vocal harmonies are on full display, and the piece shifts from soothing to ominous with ease. Perhaps the best song on the album, yet there’s still one that rivals it. “Refuse.” The closing track is perhaps the heaviest song on the album and features some crunchy riffage (akin to King Crimson’s “Red” and “Larks Tongues in Aspic Part 2”) to go with the contrapuntal vocal lines and pop melodicism. It’s a combination that some might argue overstays its welcome, but the end result is a track that is brimming with creativity.

As an overall musical statement, Turf Ascension is a bold progression for Bubblemath. While retaining their core sound, they subtly shift the needle in new stylistic directions that make the album exciting and refreshing. Yet the album’s center piece, the epic “Surface Tension” shows that this is a group that still has some growing to do given the dearth of lyrics. Even taking this into account, however, it is still one of the most adventurous compositions Bubblemath have recorded. Were the album to consist solely of that one song, it would only receive a tepid recommendation, but when paired with the other tracks, it becomes a stimulating work of musicianship worth listening to and examining.