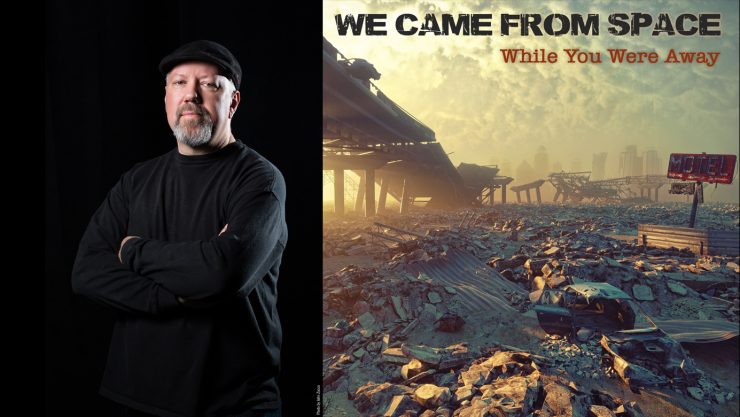 The Neal Morse Band keyboardist talks about the new NMB album as well.

Keyboard/multi-instrumentalist of the Neal Morse Band, Bill Hubauer, surprised everyone with the release of While You Were Away, the new album by his other group We Came From Space. The collection is a mix of prog and pop, with a surprises mixed in. The band is comprised of Bill Hubauer, Dave Buzard, Tim Malone, and Dave Hawk. Hubauer takes the reins on lead vocals on some of the songs, and once again shows off his incredible vocal range. This, of course, comes as no surprise to the Neal Morse Band fans. We asked Bill to fill us in on the new WCFS album and how it came about.

What is the history behind the band?

The guitar player (Dave Buzard) and I were best friends in highschool. Countless hours of our youth were spent in his bedroom listening to records and dreaming about playing music. While we were both musicians, somehow we never played in a band together. We reconnected after 20 years and decided we should do something together. We were very deliberate about wanted to create music that would be just like the music we were listening to together back in highschool, which explains the late 70s / early 80s vibe.

When did you decide to make this new album?

Much too long ago! We actually started working on this before Neal Morse Band started working on The Grand Experiment, so I think that would have been sometime in 2014, I think. So, yes, we’ve been working on this for four years! Due to everyones schedule, there were long stretches of time where we only worked on it 2 or 3 days a month. We were encouraged by the fact that we never got bored working on it after all that time.

Who writes the songs?

On this album Dave Buzard (there are two Daves in the band) and I provided most of musically ideas. We would bring in our ideas and hash them out with the group. We really wanted it to be a collaborative effort. Every band has a musical vocabulary based on the intersection of everyones interests. Utilizing this vocabulary is what gives each band a unique style and sound.

Lyrically, “the Daves” (Dave Buzard, and Dave Hawk) are both very prolific. I can write lyrics but it takes forever. They can each write three songs for every verse I write! On this album we did something that was new for me, which was group lyric writing. Occasionally someone would have an unfinished lyric and we would sit together and kick around ideas. I think we got some interesting results this way.

The song named after the band, “We Came From Space”, what is the story behind that song?

Space music! There has always been an unofficial sub-genre of music that was kind of a Rock and Roll Space Opera. I was mesmerized as a kid the first time I heard Billy Thorpe’s “Children of the Sun”. Fantastical space adventures set to cool music! Rush has done a bunch of stuff like this. There are a number of modern metal artists that still do this kind of thing. One of my favorites is Star One’s “Space Metal” from the early 2000s.

Anyway, this is my “Just for fun” tip of the hat to Children of the Sun.

Are you trying to be join Neal and Mike in how many bands can you be in competition?

Ha! I’m only really in NMB and WCFS at the moment, so I think their records are safe.

It’s taking some twists and turns. I think how its coming along is as much a mystery to us as it is everyone else! Sorry to be so vague, but the NMB philosophy is to follow the music where it wants to go and this time around the music has doubled back a few times. I think we are moving forward now.

Pick up the album ‘While You Were Away’ on the We Came From Space bandcamp page: https://wecamefromspace.bandcamp.com/releases