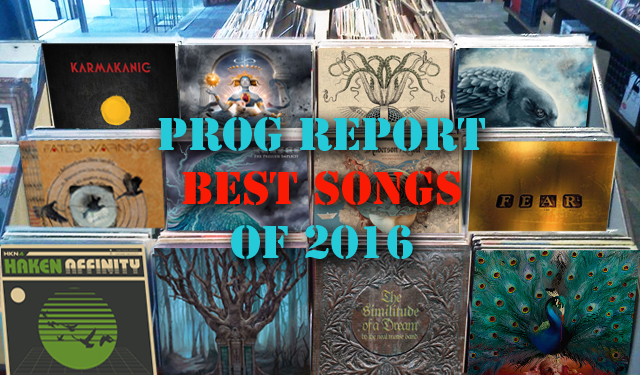 The best Progressive Rock songs of 2016

SONG OF THE YEAR: “The Architect” by Haken (From the album Affinity) – The centerpiece of the London progressive metal outfit’s 4th studio album, Affinity, is also the album’s heaviest and longest track and features an appearance from Einar of Leprous. The climactic ending is pure Prog heaven.  Honorable mention to the track “1985” which was very much in contention for this honor.

“Folklore” by Big Big Train (From the album Folklore) – The title and opening track from the glorious album of the same name is a brilliant encapsulation of Big Big Train’s sound and their ability to tell a story.  The ending has some great solo performances over one of the year’s best musical themes.

“The Ways of a Fool” by Neal Morse (From the album The Similitude Of A Dream) ***Not available for streaming – One of the single’s from our Album of the Year is a breathe of fresh air for the Neal Morse Band as it combines all the great Pop Prog styles of the 70s with a modern Prog twist for one of the album’s brightest moments.

“The Moon / Awake” by The Dear Hunter (From the album Act V: Hymns With the Devil In Confessional) – There a number of brilliant choices from this captivating album, but ultimately we love the way this song builds and ends.

“Mr. Invisible” by Thank You Scientist (From the album Stranger Heads Prevail) – This might be the catchiest song on the list and it is as complicated a musical number as you will hear all year. The New Jersey based 7-piece group produce a “Michael Jackson meets Prog” track here for a fun ride.

“My Book Of Regrets” by Steven Wilson (From the album 4 1/2) – Hard to believe this leftover track was not good enough to make his last studio album, but it is a great song nonetheless and easily would have been one of the best on that album as well as the EP it comes from.

“God the Universe and Everything Else… ” by Karmakanic (From the album DOT) – One of the best long epics of the year. In 24 minutes, the song weaves through a number of themes and does a great job of making each count.

“Marigold” by Periphery (From the album Periphery 3: Select Difficulty) – For anyone who has struggled with the aggressiveness of Periphery, we say check out this track which easily features their most hook-laden and anthemic chorus.

“Heartstrings” by Frost* (From the album Falling Satellites) – The 80s rock feel and tempo of this track makes it one of the most exciting and fist-pumping songs from this amazing return album. It was featured on an older EP but remaking this was a good choice.

“A Life Left Behind” by Dream Theater (From the album The Astonishing) – A lot of The Astonishing only makes sense when listening to the whole thing, but there are a few stand alone tracks like this one, which has our favorite chorus and melody from this album, plus a killer guitar opening.

“Invention” by Anderson/Stolt (From the album Invention Of Knowledge) – All you need to hear are the first few seconds of Jon Anderson singing here to know its great. It immediately feels like rediscovering an old friend.

“Rhythm in the Spirit” by Kansas (From the album The Prelude Implicit) – Kansas’ new album is a return to their 70s classic rock sound, and this track is a clear representation of how good they can sound in 2016.

“Living In FEAR” by Marillion (From the album F.E.A.R.) – A lighter moment from a largely dark album, the message and the power behind the delivery here are spectacular.

“Lines” by Long Distance Calling (From the album TRIPS) – One of the heaviest and catchiest choruses of the year from an album full of great riffs.

“The Ghosts of Home” by Fates Warning (From the album Theories of Flight) – The long epic from the highly acclaimed album by the Prog Metal veterans can rank up there with some of the classics.

“Secondary Genesis” by Novena (From the album Secondary Genesis) – A side project featuring Ross Jennings of Haken. This track features some insane playing and writing with some of the quirkiness that makes Haken great.

“A Fleeting Glance” by Opeth (From the album Sorceress) -This song features the best ending on the new Opeth album around some new and different instrumentation from the group.

“by the light of a sun” by John Wesley (From the album ‘a way you’ll never be’) – The revered guitarist delivers a raw and powerful rock track with strong vocals and a killer hook.

“Realm of You and Me” by Rikard Sjoblom (From the album The Unbendable Sleep) – The former Beardfish frontman and now member of Big Big Train has a knack for delivering songs that embed in your brain like this one.

“Secret Sciences” by Devin Townsend Project (From the album Transcendence) – One of a bunch of great songs from a dynamic and powerful album, we love this song for how different it sounds.