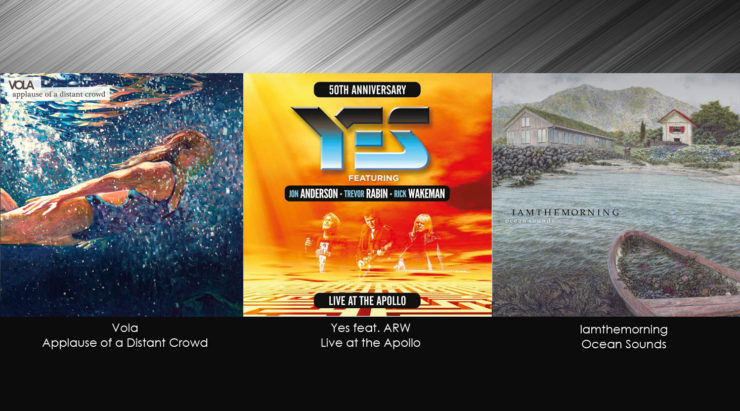 Jon Anderson, Trevor Rabin, and Rick Wakeman spent much of the last year and a half thrilling audiences all over the world with their live shows. Mixing classics from 70s, 80s, and 90s Yes albums, the trio along along with drummer Lou Molino and Lee Pomeroy, proved they could still play these songs with the enthusiasm and skill that they possessed decades ago. On this live set, which is also available as a DVD and Blu-Ray, the band sound brilliant and the setlist is nearly a perfect sampler for any Yes fan, including Heart of the Sunrise, Lift Me Up, and Changes, among many others. There are oddly placed audience applauses throughout which are louder than usually experienced on live albums, but it does not take away from a thrilling collection of some of the greatest prog songs ever written. Jon Anderson, meanwhile, still sounds as good as ever and proves why he is the golden voice of prog.

Formed in Copenhagen, Denmark in 2006, VOLA are among the new breed of prog bands exploring a mix of 70’s style progressive rock, electronica, industrial and metal, topped off with clear, beautiful vocal lines. On their sophomore album, Applause of a Distant Crowd, they probe society’s distractions from thoughtfulness and examine the way human relationships have evolved whilst touching upon fear and anxiety. The lead single “Ghosts” finds the band flirting with a more alternative sound, while songs like “Smartfriend” display the band’s heavier, aggressive sound. The production here is pristine and allows the bands to explore lots of musical territory on this very impressive collection.

Following the success of two highly-praised albums on Kscope, Belighted and Lighthouse, Russian duo Gleb Kolyadin and Marjana Semkina have released Ocean Sounds, a new studio film shot at and named after a remote recording studio on Giske, a Norwegian island. The music contained in this set captures Iamthemorning’s live set-up from the last three years, consisting of songs from their first three studio albums and an unplugged recording of “Blue Sea”, the first track to be written for their upcoming fourth album and exclusive to this Blu-ray disc. As always with this duo, the performances here are grand, epic, and beautiful. This makes a perfect addition to the collection of any fan of this eclectic group.