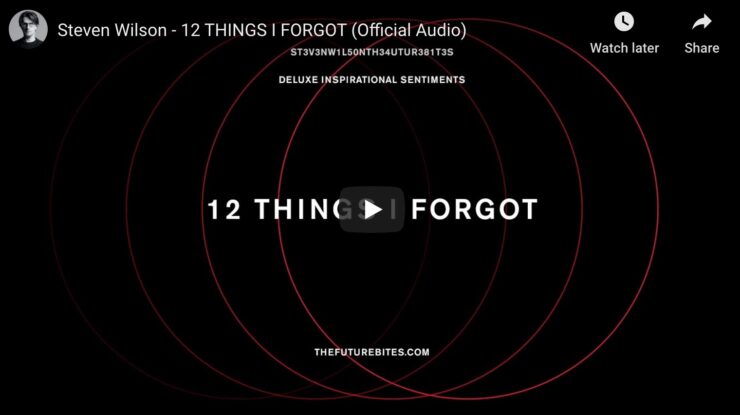 Steven Wilson has announced details of a completely unique special edition of his forthcoming sixth album, The Future Bites. The Ultra Deluxe Music Product On Obsolete Media will retail for £10,000. All proceeds will go directly to the Music Venue Trust to help save grassroots gig venues in the UK.

The Future Bites will be released on January 29, 2021 through Caroline International. You can listen to the new single “12 Things I Forgot” here:

The Ultra Deluxe Music Product On Obsolete Media provides an insight into Steven’s working process. The ultimate aspirational product, it proves that if music is an ongoing conversation between artist and fan, this one off edition of The Future Bites is less mass email and more like the closest thing you’ll get to an in-depth discussion with the artist over an intimate dinner date for two.

“This edition of The Future Bites takes the whole notion of deluxe limited editions to its logical and fairly extreme conclusion, as the ultimate limited edition will obviously end up being just one copy,” say Wilson. “In many ways, this edition is more analogous with the world of art than with those of music or luxury branding. Only one person can own an actual painting with the artist’s brush strokes on it. There is no variance, only the one original. With regards the contents of the one of one edition, it’s the purchaser’s choice as whether they decide to share what they’ve bought or keep it to themselves. Do they want to exhibit ‘the painting’, or put it on display at home? If it was me, I’d probably keep it private but I’ll leave it entirely up to them as what they do with the contents of their purchase.”

* One sided 7 inch single with unique track The Taskmaster – an edition of one, never to be released anywhere else

The Ultra Deluxe Music Product On Obsolete Media will go on via Wilson’s website at 9am on Black Friday (November 27).