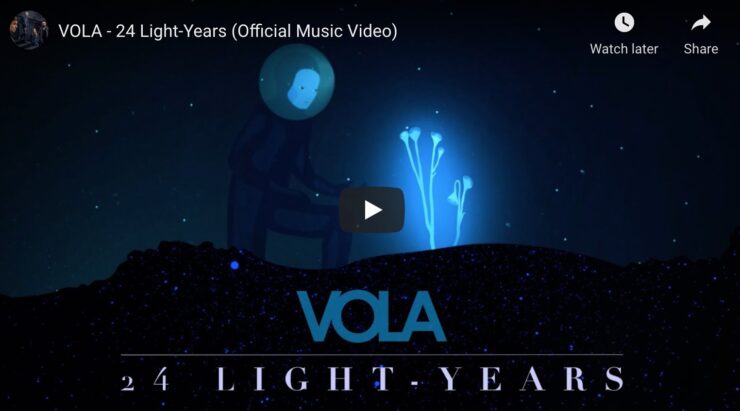 ‘Witness’ will be out May 21st via Mascot Records.

VOLA and Mascot Records have presented the third instant gratification track in front of the band’s new studio album Witness planned for global release on May 21. The song titled “24 Light Years.” and accompanying video can be heard and seen here. The animated video was created by Nicolai Mogensen and Anne Nørkjær Bang.

Mogensen shares, “We are very excited to share the music video for ’24 Light-Years’. This song is one of my favorites from the forthcoming album, and it has been such a joy working on the track from a visual perspective. Anne and I have been making videos together for a while. We like to try out new techniques and explore different styles of drawing and animation. For this one, we went for a more digital, spacy, and fluent look and vibe. Anne has made the drawings for the video while I worked with the animation. We still consider ourselves novices in this field, but we put a lot of time and love into this little piece of work. We really hope that you enjoy it!”

The album runs the gauntlet of styles with the colossal, “These Black Claws” ft. LA/Amsterdam electronic/hip-hop duo SHAHMEN, one of the standout tracks. The duo has a formidable following and their moments of pure tonal bliss, dark, hard beats and original narratives was the perfect marriage for VOLA. The song is a metaphor for addiction and the experience of being pulled back into the darkness. Bless (vocalist in SHAHMEN) contributed the lyrics for his verse, Mygind says, “I think his vocals contribute with a demonic vibe while adding groove to the track. The beat in the verse is very hip-hop inspired, so putting rap on top feels like fulfilling the potential of that part.”