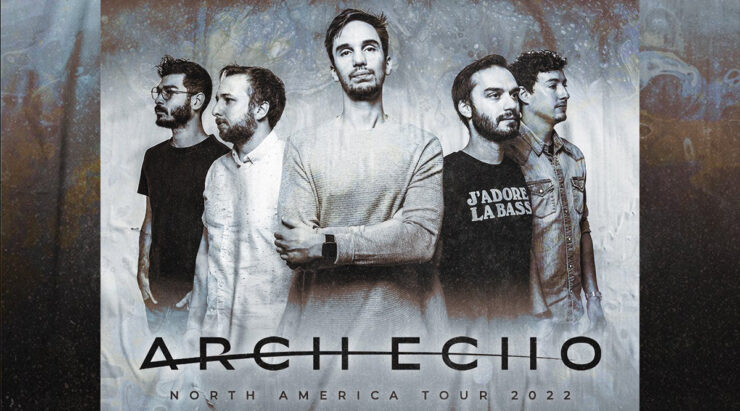 You can watch the music video for ‘Battlestar Nostalgica’ here:

‘Battlestar Nostalgica’ weaves through a diverse yet coherent mosaic of sonic landscapes. Thick nostalgic synths, engaging harmony and crushing riffs all come together to make a colourful and powerful piece of progressive music. Naming influences such as Rush, Alan Holdsworth and Animals As Leaders, the quintet draws inspiration from a wide variety of artists and also video games, bringing together a fun and uplifting soundscape that encompasses the nature of the instrumental quintet.

The band says this about the track “Battlestar Nostalgica is an offering taken from our forthcoming album that will be released in 2023. We wrote the song by bouncing off of each others’ ideas and influences and thought we’d inject a bunch of fun into the song. We shot the video in a warehouse in Nashville and we’re psyched to debut this song live on our forthcoming headline tour dates starting next week. See you on the road!”

Arch Echo is the brainchild of five musicians who wish to push the envelope of modern music. Their goal is to create music that is not only complex, but accessible to the listener, delivered with passion and enthusiasm. Tours in North America and Europe soon followed including a mainstage debut at the UK Tech Fest in 2018. Arch Echo returned with a 2019 follow up “You Won’t Believe What Happens Next!” and again in 2020 with their 4- track EP, “Story I”.

Tours with artists such as Dream Theater, Periphery, Plini, VOLA and a co-headline Japanese tour with Jacky Vincent brought their powerful live sound to new ears all over the world.