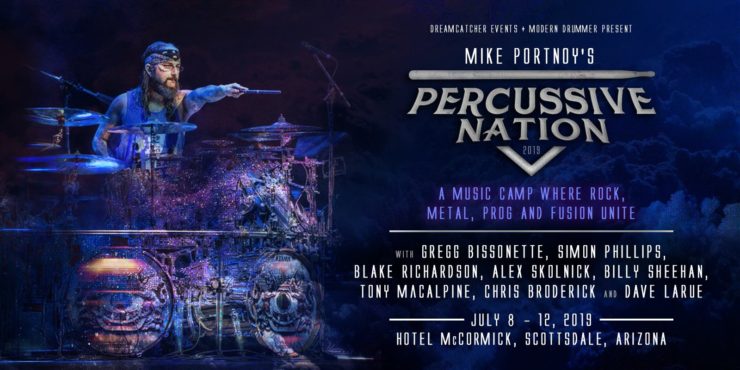 The event will take place at the Hotel McCormick in Scottsdale AZ July 8-12, 2019

After a lot of teasing about a big announcement online, the ever-busy Mike Portnoy has announced his very own music camp titled Percussive Nation.  The camp, of course, is highlighted by Portnoy himself, as well as other drummers and musicians across the rock spectrum. The event will take place at the Hotel McCormick in Scottsdale AZ July 8-12, 2019 for 4 days of Education, Entertainment and the most Intimate Concerts you’ll ever experience!! The website is now live and open for registration! www.percussivenation.com

Portnoy says, “I am so excited to announce the debut of “PERCUSSIVE NATION”!!
This is more than just a Drum Camp…it is a Music Camp for all musicians of every instrument and every level of playing…or even if you don’t play an instrument at all, it is going to have something for everyone!

Joining me for my inaugural edition are some of the greatest players in the world!”