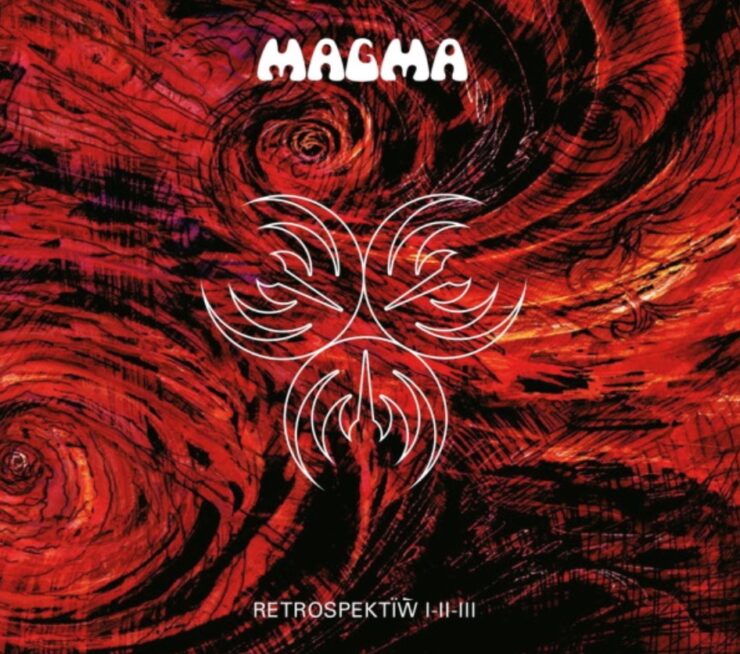 It was at the Olympia in June 1980 that the 10th anniversary of Magma was celebrated during three memorable evenings.

This retrospective, bringing together most of the musicians who were part of the group, saw the light of day in the form of 2 albums, one double, Retrospektïw 1/2 the other single, Retrospektïw 3 which was, despite its numbering, published in first. Three titles make up the menu of this Retrospektïw 3: “Retrovision,” a long piece in the continuity of the spirit of the music of the album Attahk, where, on a hellish train, the voices of Stella Vander, Guy Khalifa and Maria Popkiewicz display an astonishing ease, “Hhaï,” in a supercharged version where the Lockwood/Paganotti/Widemann trio performs wonders, and finally “La Dawotsin” where, in a much calmer register, the voice of Christian Vander captivates by its mastery and its depth sensitivity.

Available on Jan 25th, 2021, a bonus of more than 15 minutes appears on this reissue, it is the first studio recording of the song “Rétrovision,” a pre-production demo for a studio album made in January 1980. Finally, “Rétrovision” will never exist in a studio version.

Recorded as Retrospektïw 3 during the evenings of the Olympia in June 1980, Retrospektïw 1/2 is a fundamental album insofar as it finally presents “Theusz Hamtaahk,” the first movement of the trilogy of the same name, of which we already knew the second movement, “Ẁurdah Ïtah,” as well as the third, “Mekanïk Destruktïw Kommandöh.”

A piece performed on stage since 1974, “Theusz Hamtaahk” waited years before being engraved for eternity, because Christian Vander wanted each note to be beautiful, magical, essential and definitive. It is with the same respect for the music that he also offers us on this double album a magnificent version of “Mekanïk Destruktïw Kommandöh,” a version which allows itself two great moments with the hallucinating improvisations of Bernard Paganotti and Didier Lockwood. Klaus Blasquiz, who did not appear on the Retrospektïw 3 album, provides lead vocals this time.

Without a doubt, Magma has left the legacy of constantly evolving music, which defies all standards and connivance of rock, evolving in a universe of their own creation.