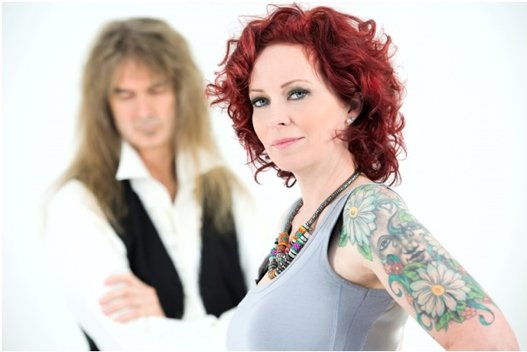 Arjen Lucassen (Ayreon, Star One, Guilt Machine) & Anneke van Giersbergen (The Gathering, Devin Townsend Project) who recently revealed that they had joined forces for new band The Gentle Storm, have signed a deal with InsideOutMusic for the release of their debut album in 2015.

Arjen comments: “We are thrilled to be able to strengthen our relationship with InsideOut Music as The Gentle Storm’s label.” Anneke adds: “We’re in the middle of recording these amazing new songs and are very excited the label shows an equal amount of faith in this release. We can’t wait for people to hear it and are happy this superb team will help us spread the word.”

Having originally worked together back in 1998 on Ayreon’s album ‘Into The Electric Castle’, and reconvening again for the seventh Ayreon album ‘01011001’, The Gentle Storm sees the duo collaborate for a full double-album that will see the light of day next year. Anneke will also take the music on the road in 2015, backed by a band of Dutch musicians; however Arjen himself will not take part.

Arjen Lucassen recently picked up the Virtuoso award at this year’s Progressive Music Awards, in front of an audience that included Peter Gabriel & Rick Wakeman amongst other progressive rock legends. Last year saw the release of the latest album from his Ayreon project entitled ‘The Theory Of Everything’ which featured guest appearances from the aforementioned Wakeman as well as Steve Hackett and Keith Emerson.

Anneke Van Giersbergen has also had an extremely busy 12 months following the release of her latest solo album ‘Drive’, playing live across the world with her solo band, Devin Townsend Project, and with Daniel Cavanagh of Anathema. She will also be playing a special anniversary show with former band The Gathering in November as well has having taken part in Devin Townsend’s forthcoming new album Z².