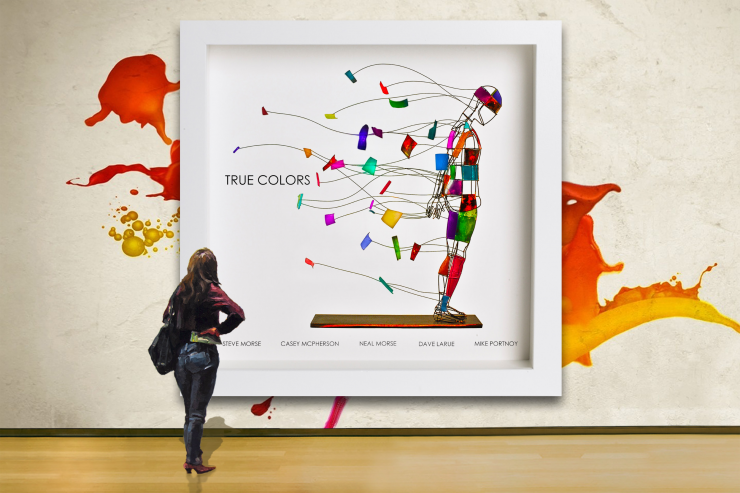 Flying Colors appeared as a new surprise supergroup in 2013 with the pop-infused self-titled album. The band’s members, Mike Portnoy, Neal Morse, Steve Morse, Dave LaRue, and Casey McPherson, certainly do not need any introductions and their pedigrees going into their debut album immediately set the expectations high.  The results were spectacular, from the proggy “Infinite Fire” to the pop perfection of “Kayla” and “The Storm”.  The album was produced by the legendary Peter Collins, known for his work with Rush and Queensrÿche. Since the band were going for a mainstream market, the original master was loud which has been known to compromise the dynamics and detail of the sound, a common occurrence in mastering these days. Now comes the release of the same debut album with the raw mix and unmastered tracks, called True Colors, created by legendary mix engineer Michael Brauer.  The result is a warmer and more dynamic sounding album.

There is no need in reviewing the album song by song as that has been done with the original release of the album, but it is worth pointing out some of the differences in the mix.  The keyboards are no longer buried, the drums pop, and the overall sound doesn’t have that distorted nature when raising the volume. The vocals are pristine and sound clean. You hear the warmth in McPherson’s voice on songs like “The Storm” and “Everything Changes”, still the band’s best ballad.  The opening “Blue Ocean” sounds like a jam session and you are right in the room with them.

Now, it is fair to point out that if you only heard the original, that album still sounds remarkable and that is mostly based on the songs and incredible performances by the world’s best musicians. However, having the chance to compare to two, it is nice to be able to hear the music as it was intended, from the soundboard. The label has made various files available, there is the MP3 version, as well as WAV and FLAC files.  The WAV files and FLAC files are definitely worth checking out if you are a fan of this band and the album.

In addition to the music, there is a more elaborate booklet with beautiful pictures put together by executive producer Bill Evans. This is not like buying the same album again, it is much more.

Available only direct from the band: http://www.calliopia.org

The download is 1GB, and includes: • The original, raw 16-bit WAV files. • Uncompressed FLAC. • 320 Kbps MP3 files. • 256 Kbps iTunes/AAC files. And a 102 page (51 spreads) digital booklet in Ultra HD with all-new artwork, an award-awaiting new cover by Bill, and 50 unreleased photos from the making of the album.