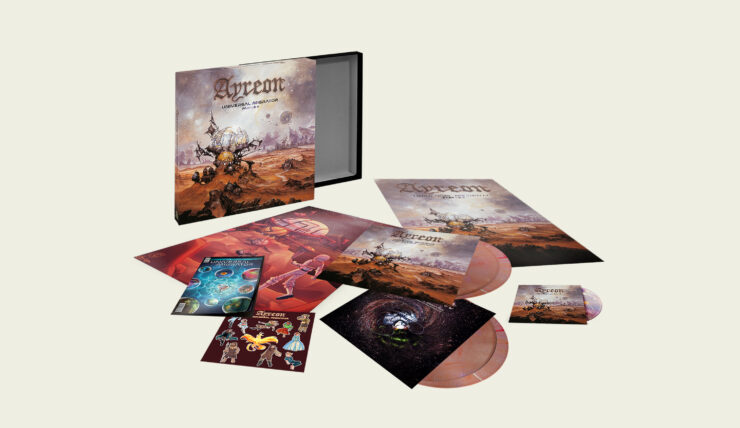 Universal Migrator Pt 1: The Dream Sequencer and Universal Migrator Pt 2: Flight of the Migrator were originally released simultaneously in 2000, following the majestically sprawling hit album Into the Electric Castle two years previously. The Dream Sequencer continues the plot from The Final Experiment (1995), starting in the year 2084 when the final world war wiped out all life on Earth. Flight of the Migrator continues the story of the last living human being, the colonist on Mars and his decision to use the Dream Sequencer machine to travel back to before the universe was formed.

When approaching the considerable task of remixing and remastering the albums, Arjen had to dig through his attic and unearth his ADAT recorder and all the old 8-track ADAT tapes. He then had to import the audio of all 70 tapes (40 minutes each) into the computer. Not a job for the faint of heart!” he says. “But once I was remixing, I enjoyed revisiting the recordings and all the memories that came up as I worked.”

Arjen Lucassen continues his crusade of remixing and remastering his finest work to absolute perfection and Universal Migrator, Pt. I & 2 (2022 Remixed & Remastered) is a stunning addition to his spectacular canon. Thanks to advancements in technology, fans can now get the chance to hear the albums through the ears of Lucassen as he intended them.