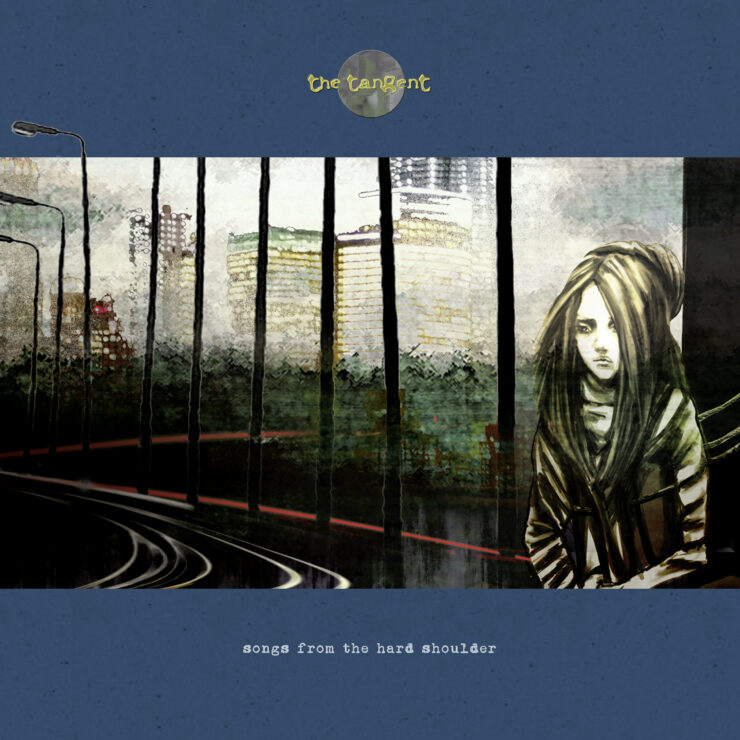 Webster’s defines “tangent” as “an abrupt change of course” or “digression” –“diverging from an original purpose or course.” That pretty much sums up what The Tangent is all about – abrupt musical changes, digressions from scripted rock formulas and unpredictable diversions from what you might expect. This constant striving for unexpected, divergent results is about the only thing you can consistently expect from this seminal British prog-jazz-rock collective, headed by composer-singer-keyboardist Andy Tillison. In fact, it’s hard come up with another band whose name so aptly defines its musical signature. For 20 years, this has been the case with Tillison and friends. And The Tangent’s latest release, Songs From the Hard Shoulder, is no exception.

Recorded during the pandemic lockdown, with band members contributing via musical file share, the record’s four tracks are informed by a single lyrical theme: social isolation (COVID-related and not). But musically, Songs From the Hard Shoulder – the band’s 12th studio recording — is all over the map. Symphonic rock. Vintage prog. American jazz. Motown R&B. Funk. Hardcore metal. Beatle-esque pop. Canterbury fusion. It’s all here. Everything Tillison writes is informed by a kind of musical ADD; he never stays in one place for very long. And extraordinary contributions from Jonas Reingold (bass), Luke Machin (guitar/vocals), Steve Roberts (drums) and Theo Travis (sax & flute) keep everything chugging along – delivering constant, toothsome surprises around every turn. As ever, the emphasis here is on extended suites. All but one of the tracks on Songs From the Hard Shoulder clock in at more than 16 minutes. But everything counts — not a single note is out of place or superfluous.

The album opens with “The Changes,” 17-minute epic about isolation and alienation in the era of COVID. It’s a whimsical slow-building story song that showcases Tillison’s understated half-spoken vocals and flights-of-fancy synth work, Machin’s fiery licks and Travis’s tasty flute lines — all propelled by a toe-tapping rhythm section laid down by Jonas and Roberts. Five minutes in, the song breaks into a series of fusion passages, funkified workouts, proggy jams and atmospheric Floydian soundscapes. Near the end, Tillison muses: “I wonder if we ever really need to go just back to once before; did we take away anything?” It’s a heart-tugging moment that is followed up with some of the most inspired keyboard and guitar work on the album.

Next up: “The GPS Vultures,” an instrumental tour-de-force that reprises themes from 2006’s “GPS Culture” and covers a Columbia House catalog of styles. It opens with intricate guitar-synth-sax lines that sound like a shotgun marriage of Return to Forever and Van der Graaf Generator. Two minutes in, we get a Gentle Giant-like contrapuntal bridge to a stirring guitar-keys duet that leads to a head-banging rock and roll rave-up. Next comes a disco-inflected jam that would make Sly Stone jump up and take notice. A free-form snippet of Frank Zappa-like strangeness follows. Then the crew is off and running again, cooking up an Eastern-influenced jam that echoes the weirdly brilliant Ozric Tentacles.

At the 10-minute mark, Tillison and Travis slow things down, easing into a spare acoustic piano-and-flute interlude that sets the stage for Machin to channel his inner Al Di Meola with a dazzling Flamenco guitar break. The piece could easily end here, but it doesn’t. For the final few minutes, the band picks up steam again, reprising the main theme again and racing – furiously — to the close. A piece as wide-ranging as this one could easily become a muddle of flashy chops and bad transitions. Instead, each distinct passage leads clearly and cleanly to the next section. Along the way, every player delivers a variation on the main 7-note musical theme – on bass, guitar, keys, sax, flute – to hold it all together. The result is a masterpiece of tune smithing and virtuosic performance. It’s all the more striking to note that the players produced this opus without ever being in the same room at the same time.

The longest track on the album, “The Lady Tied to the Lamp Post,” is a darkly moving 21-minute story song about the plight of the homeless. Tillison delivers his best vocal performance here, summoning both Trent Reznor-like rage and Jackson Browne-esque compassion in recounting his chance meeting of a homeless woman in Leeds. Cinematic in sweep and scope, the epic unspools like a film noir for the ears. But Tillison’s impassioned political message never overwhelms the music. Along the way, multi-textured instrumental passages showcase everything The Tangent does well – combining Reingold’s percolating bass lines, Machin’s scorching guitar licks, Tillison’s inspired synth work, Travis’s soulful sax lines and Roberts’s precision drumming.

The album’s closing track is the brief Motown-style ditty “Wasted Soul,” which plays like a “Dancing in the Streets” retread for the COVID era, envisioning the celebrations that will mark the end of the pandemic. After the intensity of the three epic tracks that come before, this short, radio-friendly is a welcome uplifting palate cleanser that ends the album on a hopeful high note.

Some versions and vinyl editions of Songs From the Hard Shoulder include the bonus track “In The Dead Of Night,” an extended cover of the classic 1978 UK song. You might be tempted to think this one is a throwaway or filler. But you’d be wrong. While Tillison and Co. give the track a loyal reading for the first six minutes, they then take it in a completely new direction – going off on, well…a tangent, you might say – for the final 10 minutes, giving it an entirely new spin.

On this track, and others on the album, Tillison makes no secret of his love for the golden era of progressive rock and its enduring influence on The Tangent’s overall sound. But, as on past recordings, it’s more homage than theft. Tillison and Co. managie to create wholly original music that is distinctly and definitively all its own.

The album is available here:
https://thetangent.lnk.to/SongsFromTheHardShoulder